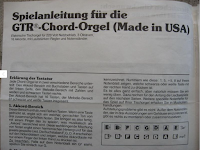 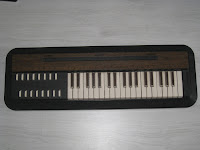 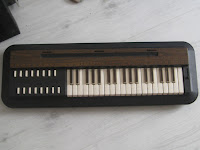 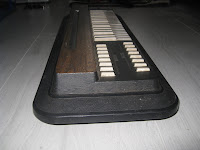 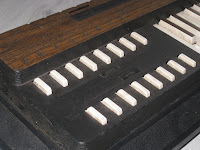 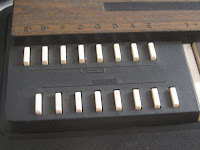 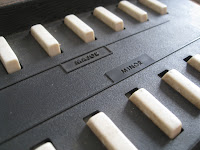 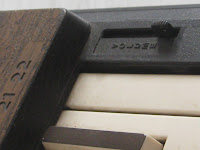 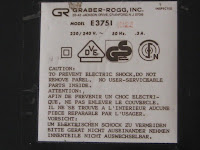 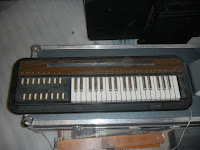 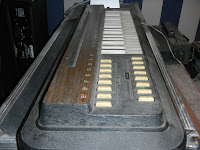 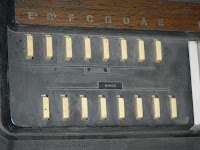 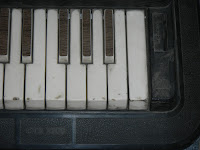 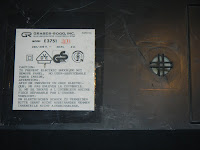 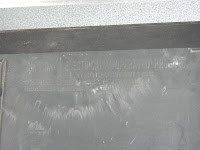 This tablehooter is not an electronic keyboard, but basically a blower operated, keyboard- shaped plastic accordion with 16 single finger chord buttons and a volume slider that controls the air pressure. Great is that it is (at least theoretically) full polyphonic and has pressure sensitive keys for very expressive playability.
The Graber Rogg CTX 1300 is almost entirely made of plastic and the welded case can not even be opened for maintenance without using raw force. While this model is quite rare, many similar instruments were made by other companies; this instrument family is commonly known as "chord organ", although they are often wrongly called "electric harmonium" and similar.

What is a chord organ?

The chord organ is a special variant of an electric reed organ that was popular between 1960th and early 1980th as cheap polyphonic beginners instrument. I don't know if they were ever regularly used on stage, but I don't think so.
A reed organ is a wind instrument consisting of a sealed case in which an electrically operated fan (or bellow) blows into to produce an overpressure. Under each key sits a reed pipe and a closed valve; when the key is pressed, the valve opens to let air escape the case and the resulting air flow makes the corresponding reed vibrate and produce a tone. This is the same mechanism used in the accordion, harmonica, melodica or mouth organ (blues harp), and regarding the size of a mouth organ, you can easily estimate that the often quite huge and bulky case of reed organs is almost completely empty. Complex reed organs can have ranks with multiple reeds per key, those are selectable through tab stops for switching the timbre (like with accordions).
The special feature of the chord organ is a group of chord buttons located to the left of the keyboard. These buttons have each 3 reeds underneath to produce single finger chords (usually) in minor and major. Often these were gladly advertised as "pre- programmed chord buttons" and the like, although they have absolutely nothing to do with digitally programmed preset accompaniments but are simply fixed organ chord tones (one per button) invented upon a time when electronic automatic accompaniments did not exist yet.
Most people still consider chord organs crap, because they sound and behave not at all like a (pipe or electronic) organ, and especially with polyphonic play or reduced volume (controlled by air pressure) the attack rate turns so slow and howls by running out of air, that it severely disturbs fast play. When out of air, high notes even fully fall silent. But when not demanded to be an "organ", they don't really play that bad, because the sound is genuinely more a cross between accordion and saxophone, and the keys respond pressure sensitive and thus permit very expressive modulations. Like with slowly overblowing a saxophone, the volume and pitch ascends while the timbre turns brighter when key pressure slowly increases. The chord buttons permit great grungy morphing cluster sounds by pressing multiple of them together and gently varying the pressure; while at high pressure they distort quite rough and bright, at low pressure their tone turns into a diffuse dull drone.
Chord organs can be recognized by the chord button group and the absence of rhythm and usually only one or very few preset sounds those all resemble an accordion. Usually they contain a quite noisy electric fan and a small mechanical volume slider that can not reduce the volume to zero because it simply gradually opens a bypass valve to reduce the air pressure inside the case.
The sound properties I have described here with the Graber Rogg CTX 1300 generally also exist with other chord organs.

In comparison to other chord organs, the Graber Rogg CTX 1300 is at least reasonable small. Unique is also the stylish fake woodgrain retro design with even woodgrain texture on the sharp keys, which fits nicely to the classic design of the first generation Atari VCS2600 videogame console. The volume can be set between medium and high room volume, but by technical reasons not really low.

Very annoying is that the plastic case is welded tight with black plastic goo at the case rim. My specimen from a flea market was rained into and the blower motor ran too slow and buzzed by hardened machine oil. Thus I had to carefully pry open the case centimeter by centimeter using a screw driver at the welded seam. Beside the rim seam the bottom was also held by plugged plastic pegs to complicate the task, and at the right seam it was welded so strongly that the plastic edge cracked when I levered it open.


The propeller is an odd shaped plastic disc which sucks the air into its center and apparently accelerates it by centrifugal force; its top covering is simple grey cardboard. It was also fairly difficult to pull the disc off the capstan without breaking it. After dismantling the motor and cleaning its bearing, I oiled it with thick silicone oil (latex care product available in sexshops); now it runs much quieter and better. But after reassembly the organ didn't play well anymore (omitted high notes etc.) by too leaky rims despite the plastic pegs held the case shut. Thus I glued window insulation adhesive strips of foam rubber onto the broken seam to seal it. Now it runs perfectly again.
Despite the case may have been welded tight to seal it (there are less radical means), I expect that it was rather done to hide the surprisingly simple plastic mechanism inside the (possibly initially expensive) organ from the customer. The reed tone generator is only a kind of plastic comb with thin plastic flaps as oscillators (be careful not to break them); their length and weight controls the note pitch. Do you remember those plastic toy party wind instrument sets with kazoo etc. for some cents (or as gifts from child- fattening and -addicting McDonalds junk food "happy meals"), those often include an 8 note plastic mouth organ?! That's exactly the mechanism found in the noble looking Graber Rogg CTX 1300. In spite of this it is quite well in tune, possibly the tiny plastic blocks at the end of each reed were even tuned in factory by laser heat or the like, because there is a tiny melted mould in some of them. The oscillator assembly looks horribly cheap and banal, but otherwise the small microchip in many modern keyboards doesn't look spectacular either and still can make nice sound, thus it is questionable if we should mock on the cheap plastic mechanism or rather be astonished by the sophisticated engineer work behind this extraterrestrial looking piece of full polyphonic technology. (Another technically astonishingly simple acoustic keyboard instrument is the Baby Piano.) A possible improvement would be a tiny (piano- like) hammer that hits the reed during strong key presses to accelerate the too slow attack phase. (I don't know if this was ever implemented in a reed organ.)
I also own a beige Bontempi B9 chord organ (37 fullsize keys, 12 chord buttons), which is bigger, louder and contains more components than the CTX 1300.
Many other companies made chord organs; e.g. some Magnus keyboards and the Antonelli "Golden Organ" series belong into this category, but most of them were made by Bontempi (the inventor of the term "chord organ"?). On eBay you can find tons of these Bontempis very cheaply. Unfortunately most 3 octave keyboard specimen (especially Bontempi models) are annoyingly huge and bulky (despite their almost empty case); the Graber Rogg CTX 1300 with its at least halfway reasonable size is an exception. Also a version with brown outer case rim and silver "CTX 1300" logo was made (seen on flea market). By my knowledge no chord organs with more than 3 octaves were made; only normal reed organs (like Hohner Organetta) were made with 4 octaves. Another similar instrument with more timbres (but no chord buttons) is the Indian portable harmonium (aka table harmonica or oriental harmonica or oriental harmonium), which has a wooden case with midsize keys and is usually powered by a hand operated bellow.
Автор: Infrequent Sound на 20:40